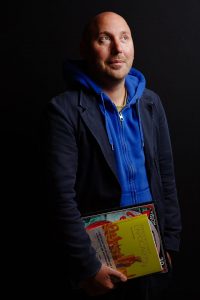 Nicolas Grivel on Chinese Comics: From Lianhuanhua to the New Talents of the Chinese Comics Scene, or the Tribulations of a Frenchman in China
The Chinese comics scene is still not very well-known around the world. This lecture aims to describe the landscape of the comics publishing industry in China, from its roots in lianhuanhua  (palm-sized serial picture-books) by such artists as He Youzhi to a new generation of cartoonists such as Zou Jian, Nie Jun and Golo Zhao who are influenced by manga, as well as European and North American comics. What will their future be outside of China?
A seeming commercial Eldorado, Grivel will examine the potential and limits of the market within Mainland China for foreign publishers and cartoonists. The lecture will also focus on Chinese universities with art departments, the deep link between comics and the animation industry, state censorship, the rules of the Chinese market and also the amazing energy of the new comics scene in China.
Born and raised in North Eastern France, Nicolas Grivel is a literary agent (Nicolas Grivel Agency). He began his publishing career in 2003 as a senior editor for Pika (publisher of manga – Hachette France). He now owns an agency specialized in the sale of rights (paper, digital and media) of bande dessinée, comics, graphic novels in creation and in translation around the world. He has sold in English graphic novels as Ariol by Emmanuel Guibet and Marc Boutavant, Today is the last day of the rest of you life by Ulli Lust, Sam Zabel & The Magic Pen by Dylan Horrocks, The Realist by Asaf Hanuka, Jim Curious by Matthias Picard, Ghetto Brother by Julian Voloj & Claudia Ahelering, Climate Changed by Philippe Squarzoni, A Game for Swallows by Zeina Abirached, An Iranian Metamorphosis by Mana Neyestani, First Man by Simon Schwartz, Peplum by Blutch, Incidents in the night by David B, etc.
The goal of Nicolas Grivel Agency is to represent and to push demanding works which make the readers think. Nicolas is casting a wide net for all kinds of graphic stories. He’s also scouting comics and artists for the American studio Laika as well and he’s teaching classes in two French Universities and doing lectures in various universities or events as Beijing Film Academy, Hanghzou Festival, Ligatura (Poznan), Budapest BookFair, Warsaw BookFair, etc.
He lives in Paris and likes to travel.
Sunday at 13.00